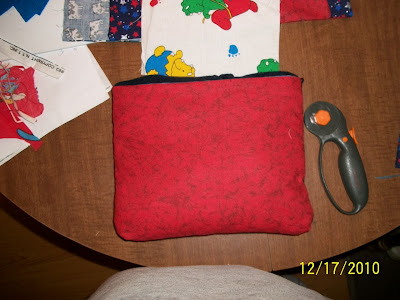 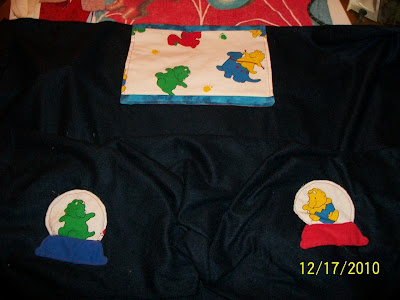 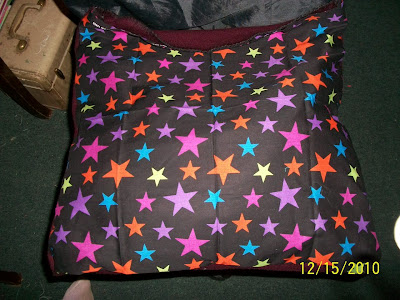 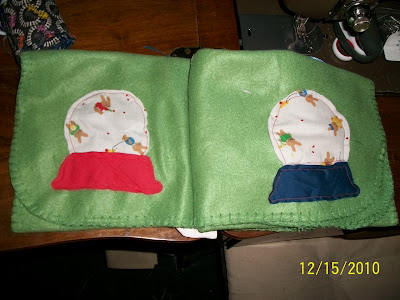 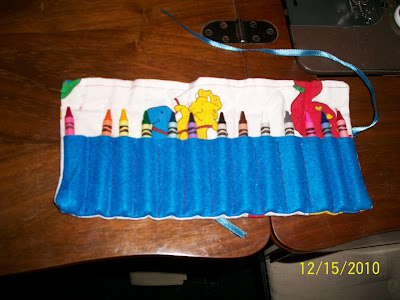 Ok I have been working on some christmas gifts for my nephews and nieces and would like to share a few of them that are done so far with my followers.

Hello I have been very busy once again working on CHRISTMAS stuff and the lot. I have some nice things to post pictures about here after the holiday . I would like to post some now but someone MAY be watching and sneak a peak.

Posted by Amanda at 3:58 AM No comments:

I recently got an email about some new great Husky tools and some holiday deals so thought i would share the link .

Posted by Amanda at 8:55 PM No comments: 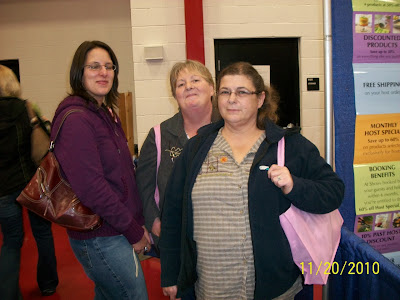 Yay. Tonight we had a great night out with my girls at a Taste of Home show in our town. 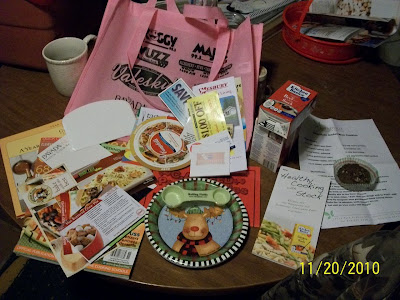 It all starts out with us going inside and getting our hands stamped, then we all receive a nice bag full of things from the shows sponsors. 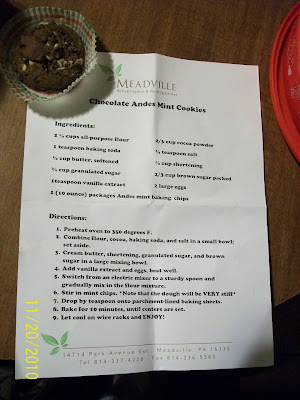 Yummy cookie and its recipe we got as a sample while waiting for show to begin from one of the vendors at the show tonight. 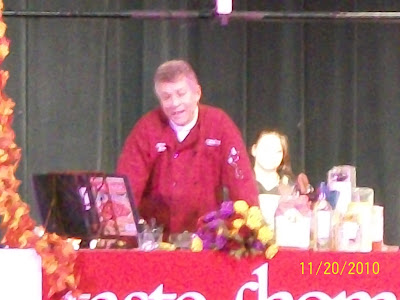 We got to watch Michael Barna make 10 different recipes from the Taste of Home magazine and each one they made they gave away at the end of the night to randomly drawn names of those that came to the show. 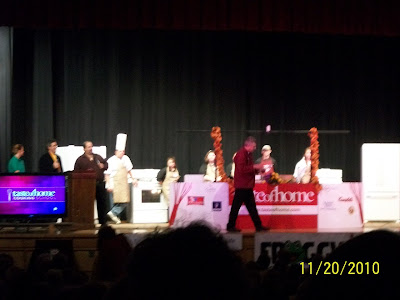 The local Vo-tech Foods department are the one who help get everything prepared and help with all the cooking during and before the show every year. 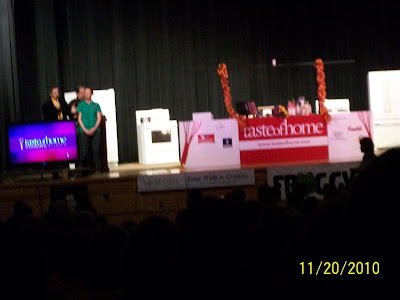 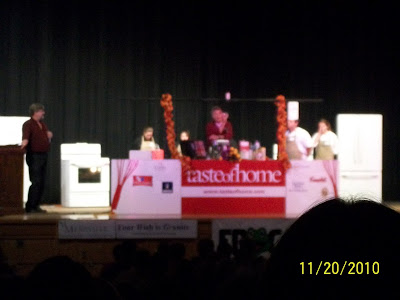 It was so much fun. This is the fourth one i have been to so far and look forward to going to as many more as come to our little hometown.


Afterwards we all went to our usual after show eatery KINGS. YUM 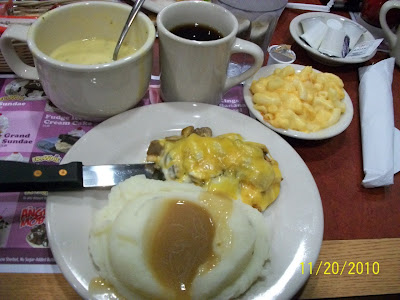 This was my Smothered chicken ,mashed potatoes and gravy,macaroni and cheese and a bowl of cheddar broccoli soup 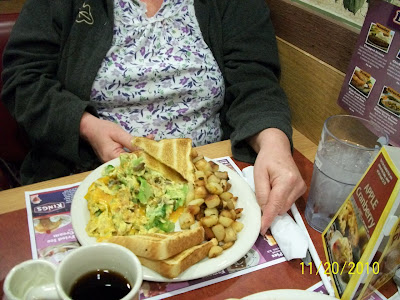 This was my Aunt Beas Country Omellette 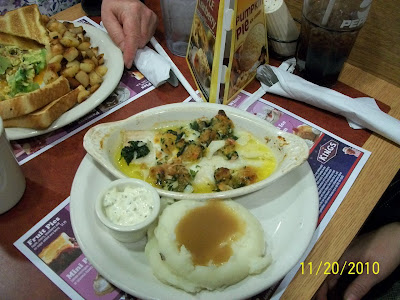 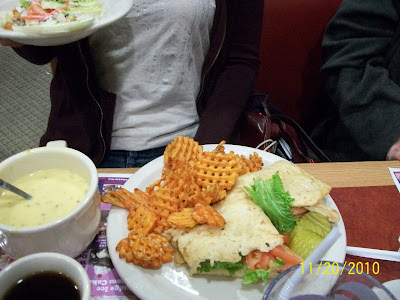 Email ThisBlogThis!Share to TwitterShare to FacebookShare to Pinterest
Labels: Family, my life

Things I have been doing .

I have been very busy with some crochet projects over the last few months that are bound for donation. I belong to a new group of gals called http://www.theknottystitchers.com/ and we have been working on a couple different projects over last few months . We started off by making baby items for the NICU here where we live and ended up filling big bins of items. I have a few of my blankets and such posted below. 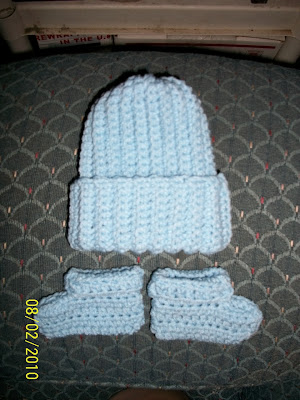 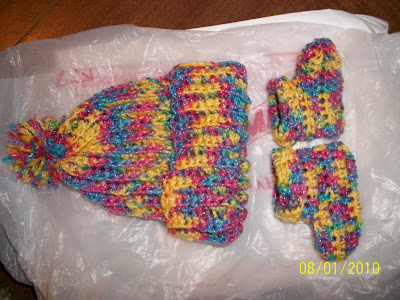 Baby booties and hat for preemie 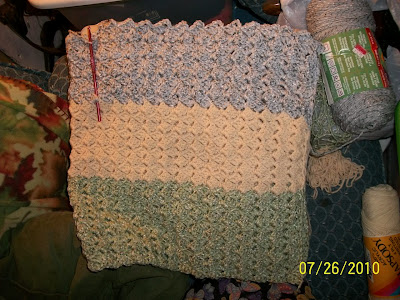 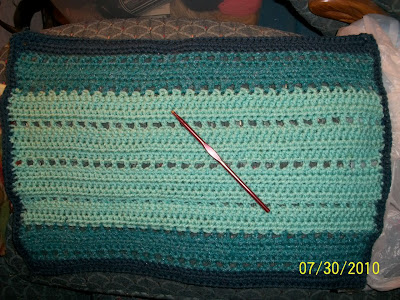 
Our current project is to make the Vets lap robes and other items for the Soldiers and Sailors home where we live . We currently have several items done and still going for this project .As we get things done i will try and post more of all things we are doing. Thank You for looking and Enjoy.

What I have been up to .

Hello following friends. I am sorry I have not been on here in such a long time I apologize . I get so busy with stuff i tend to neglect things. I would like to show you what i have been up to since I was last on my blog and hope you enjoy .Thank you .

Posted by Amanda at 2:12 AM No comments:

My new baby blankets I crocheted 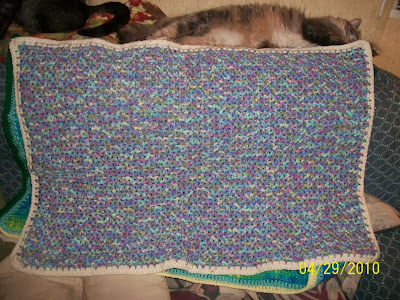 These are the latest works I had been working on the last few months and have finally finished. I am very happy how they turned out this time they were very straight and look good. 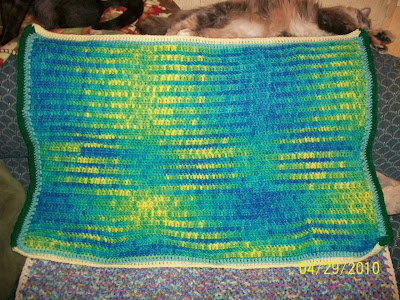 Snuggles is 200% better than ever 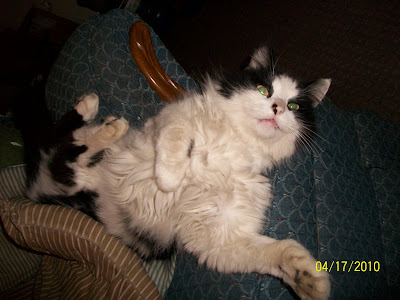 Hello all my friends . I am sorry i have not been on for some time but I want to first start with news that my Snuggles is fine and well once again after numerous tests and medications . I am happy that after almost 2 months or more of vet visits and medications and tests he is better than he has ever been now.

Email ThisBlogThis!Share to TwitterShare to FacebookShare to Pinterest
Labels: cats, my life

Hello friends. I am sorry i have been missing in action for some time now but I have had so much going on it is just awful. This is only February and so far this year I have had to take my poor kitty snuggles to the vet because he escaped and got outside. I finally got him to come back in house and when he did I found he had somehow mysteriously gotten a gash under his chin and was not eating or drinking properly. I realized I had to get him to the vet at that point after a few days because he had gotten his chin infected by now and was getting sick.

I took him in for his checkup only to find out he had gone from a 10 pound cat to less than 7 pounds and his chin was severely infected and abcessed. They got him all checked out and gave him antibiotics for his chin and all his other regular visit things up to date. I paid the bill of 275.00. I had to have him back again in a week so i took him back for a recheck where he was checked for his infected wound and weighed again and this time he once again had lost some weight.

I was once again told to come back in a week again to revisit and check to make sure everything is going ok so I did and i paid the bill of 33.00. I brought him back today again as scheduled and thought everything was going good he has started eating again and was beginning to purr slightly and seemed like he was getting better.

I got him to the vet this morning and the vet said she was still concerned because he still had a lump on his cheek and when touched it visibly would show blood in his mouth from somewhere and his weight was a little better he weighed in at 7.06. Then the vet came back from his exam and asked if we could bring him back at the end of the week because she was still concerned about lump. I said ok. I once again paid the bill of 39.80 and was given antibiotics again for him.

Now as I am about to leave the tech hands me a estimate and all the tests they need to do for his friday exam and his stay for the x-rays, blah blah blah and It is 345.00!!!! SIGH ARGHHH
So I ask if they have a payment plan, yes Ill give you paperwork to fill out and we will call it in so I say no problem. I get it filled out and they come back with I DONT QUALIFY!!! NICE!!!!

So the lady says "What do you want to do?" Well what do ya think im gonna do my cat is very ill so I make the appointment and take paperwork with estimate of another 345.00 for more tests on my cat for friday. I mean really how can I not have my little cat taken to vet when he is so sick and just let him suffer . I am upset that he got let outside but I cant just say well im not gonna pay that kind of money for an animal.

I am so afraid now that after all this I am going to get some bad news and then I will be just devastated if after all i have tried to do there is no fixing his problem because I have done the right thing . I know some people wouldnt do what I am doing for an animal anyways and believe me I really dont have the means or money to either but I just cant help but feel it is my responsibility to take care of him properly .

I have taken in all of my pets because they were unwanted and abandoned and I really want to be a good person and do right by them when no one else would. I feel like they are very valuable and just like a human being need to be taken care of even if it cost me . They do not ask for anything and give so much back in return for just loving them that it is impossible for me to just ignore the fact that he is hurting and needs medical help.

I welcome any and all comments on my long post about this ordeal and would like to thank my followers for being so kind.

Email ThisBlogThis!Share to TwitterShare to FacebookShare to Pinterest
Labels: cats

I was searching online and found this site and was AWW struck!! I have to share this with my followers because I am just amazed at the site . I read this whole thing and wish she were my family member!!
http://mochimochiland.com/weblog/?p=111